A TaskForceCO2 Licence will slash your Energy costs Today!

Just 1 PC left on every night could waste over £200 a year. The reality is there could be hundreds left on.

Of course, it doesn’t have to be just overnight – there are usually thousands of opportunities to save money utilizing hibernate and shutdowns during extended periods of inactivity during the day.

But it’s not just about money and CO2. TaskForceCO2 is much easier than scripts and policies and its more cost effective in terms of your time and effort.

Shutting down just 2 PCs will save the cost of a Site Licence which covers EVERY PC at one location! 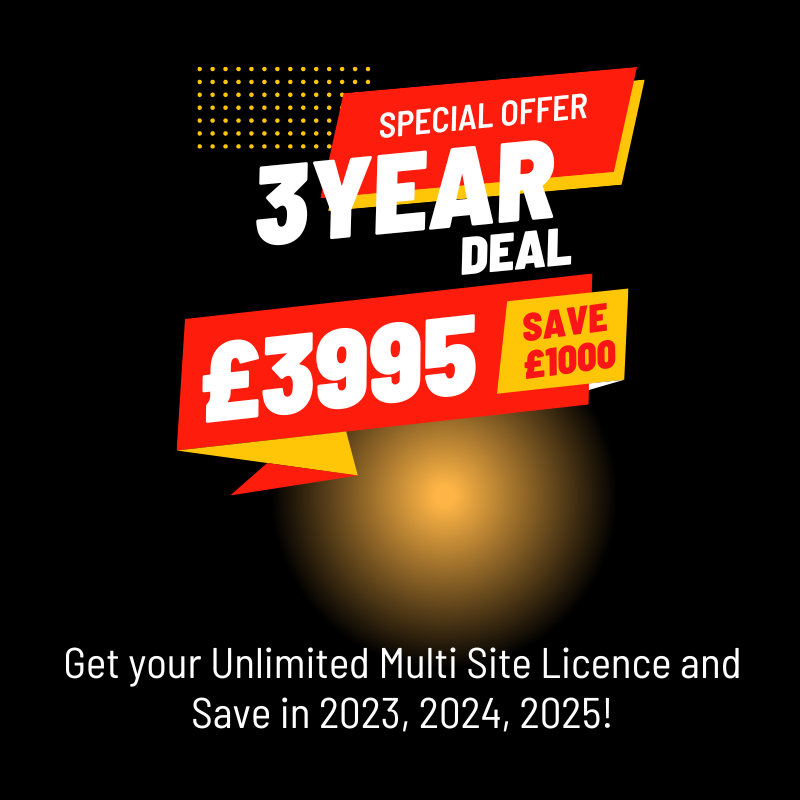 Fight back against increased energy costs and rising inflation 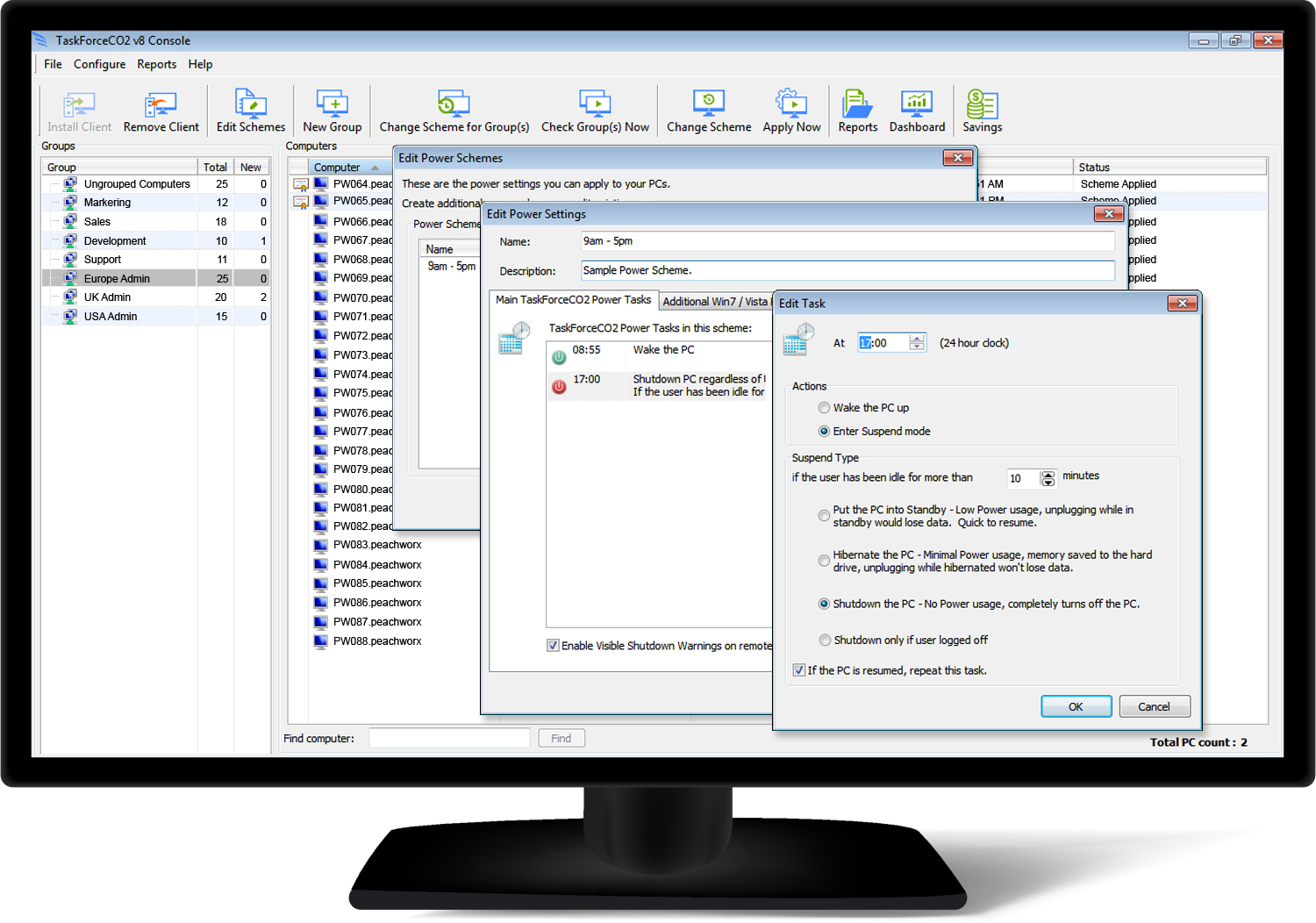 It’s impossible not to Save Money and reduce CO2

In any Organisation, when a PC is left switched on and no one is using it, its wasting money. Often scripts are used to turn PCs off at a given time, but these are complicated, often fail due to device drivers preventing shutdown, and are inflexible.

If you install TaskForceCO2 you can set up schemes that allow you to save money during any period when a PC is not in use and most importantly, it makes the procedure accountable.

For instance, you wouldn’t want your PCs shutting down every 2 minutes but if no one has touched it for say 30 minutes, and it’s after a certain time like 5 pm, it’s likely the user has gone home so you can execute an automatic shut down of the PC.

You could also say, ‘Hibernate any PC that hasn’t been touched for 10 minutes after 9am then shut the PCs down at 4pm but only if no one is logged on, then shut it down at 6pm regardless of if someone is logged on or not.’.

That would mean during the period of hibernation the PC would use virtually no electricity but save the data until finally shutting it down properly at 6pm.

With TaskForceCO2 all these savings are recorded so you can see at a glance if your investment has paid off. In our experience, this is usually within 2 weeks.

With every PC at a single site or all your sites covered, its impossible not to save more than a Licence costs.

Essential Software for all your sites

If just 1 PC can waste £200 a year, how much could your organisation Save with an accountable power management policy?

With inflation and energy costs rising it makes a refreshing change to find a way to substantially reduce costs … and prove it!

Impossible not to save more!

With TaskForceCO2 it’s virtually impossible not to save more than our Single and Multi Site Licences cost, usually in just weeks!

A 3 Year Deal covering Every PC!

Fight back against increasing energy prices and rising inflation. 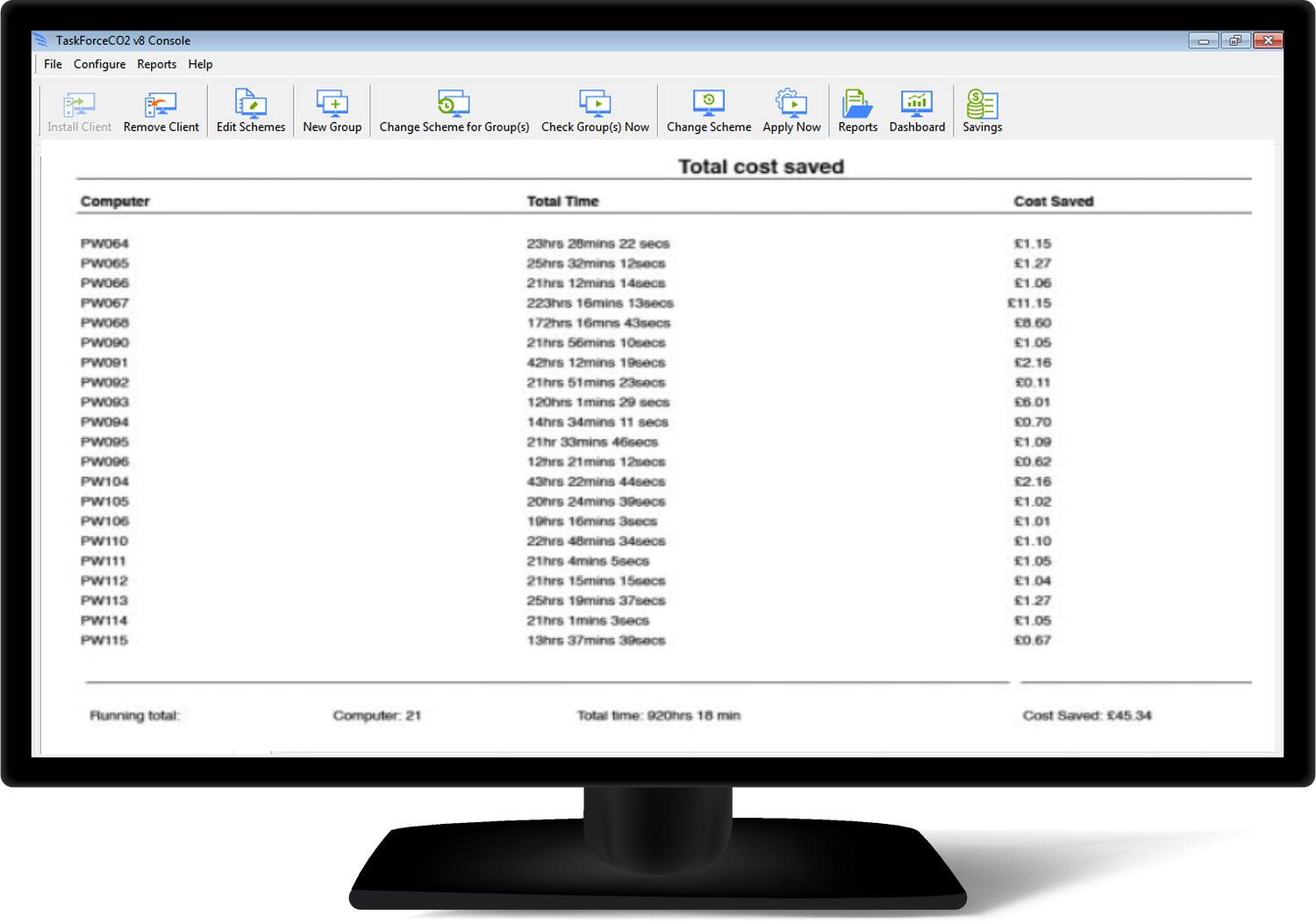 In today’s economy, no one can afford to waste money powering PCs that are doing nothing. At a potential cost of over £200 a year each, if hundreds are left on it’s not only a big waste of cash but it needlessly increases CO2 emissions too.

TaskForceCO2 automates the waking up and shutting down of PCs. Yes, you can do it with scripts or policies but that’s limited, time-consuming, doesn’t give you any Financial or CO2 reports, won’t easily give you multiple power events per day and won’t let you know when PCs don’t shut down.